The plum blossom coupling is to install a full plum blossom inertia ring between the claws of the two half-couplings with opposite shapes to complete the connection of the two half-couplings. The energy is transmitted through the extrusion between the convex claw and the inertial ring, and the inertial deformation of the inertial ring compensates for the absolute offset of the two axes to complete the vibration reduction and buffering. This kind of coupling has been applied, and five design methods formulated by GB/T52722002: LM type (basic type), LMD type (single flange type), LMS type (double flange type), LMZI type (split type) Driving wheel type) and LNZII (full brake wheel type). Each method has 14 specifications, their standard shaft hole diameter d=12160mm, shaft hole length L=35135mm, nominal torque T=2525000Nm, allowable speed [n]=150015300rmin.

The design of the plum-blossom coupling is simple, the number of parts is small, the radial size is small, and there is no need for smoothness; the inertial parts have high compressive bearing strength. Except for the double flange type quincunx inertia coupling, when replacing the consumable parts quincunx inertial parts, it is necessary to move the half coupling axially. This coupling has some compensation for the absolute offset of the two shafts. 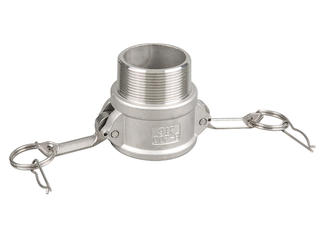 Standard scope and functional characteristics of MLS double flange plum blossom coupling 1LMS (original MLS) double flange plum blossom inertia coupling generally consists of two protruding teeth closely meshing and receiving radial extrusion to transmit torque. When the two axes have an absolute offset, the inertial components will produce corresponding inertial deformations, which play an active compensation role. 2. The plum-shaped inertia coupling is generally used in the operating conditions of repeated starting, forward and reverse rotation, medium and high speed, medium torque and high reliability, similar to: metallurgy, mining, alcohol, chemical industry, lifting, transportation, light industry, Dyeing, water pump, fan, etc. Operating conditions The temperature is 35℃～+80℃, the nominal torque is 25～12500Nm, and the allowable speed is 1500～15300r/min.
LMD single-flange plum blossom inertial coupling is generally composed of two protruding teeth that are closely meshed and subjected to radial extrusion to transmit torque. When the two axes are absolutely offset, the inertial components will produce corresponding inertial deformation, which can actively compensate effect. The plum blossom inertial distance body has multiple blade branches. Like the slider coupling, it is also squeezed to make the plum blossom inertial distance body conform to the bushings on both sides, thereby ensuring its zero-clearance function. Unlike the slider coupling, the plum-blossom coupling is driven by extrusion, while the slider coupling is driven by shear force. When using the zero-clearance claw coupling, the user should pay attention not to exceed the maximum acceptable strength of the inertial parts given by the manufacturer (under the premise of ensuring zero clearance), otherwise the plum blossom inertial distance body will be pressed The flat deformation obtains inertia, the preload is lost, resulting in the function of zero clearance, and the user may not notice it until a major problem occurs.