What does the evaluation of the zero components of the plum coupling refer to?

home / news / Industry News / What does the evaluation of the zero components of the plum coupling refer to?

What does the evaluation of the zero components of the plum coupling refer to?

Before the assembly of the plum blossom coupling, some numbers should be made for the mutual cooperation between the various parts of the coupling for reference when reassembling. Couplings used for high-speed equipment, the connecting nuts of which are weighed, must be clearly marked and cannot be mistaken. It is an extremely important operation after the assembly of the coupling to complete the cleaning, liquidation and quality evaluation of the complete machine of the plum-blossom coupling. The evaluation of zero components means that after each component is in operation, its size, shape and material nature are compared with the quality requirements of the customization of the zero components to determine which components can be used continuously and which components should be used. After repairing, which parts belong to the parts that should be scrapped and refurbished. When assembling the coupling, normally remove the connecting nut first. Because the corrugated surface accumulates a layer of grease, eroded products and other deposits, it is not easy to assemble the nut, especially for the nut with heavy corrosion, it is very difficult to assemble.
The assembly of the connecting nut must choose a suitable machine. Because the force surface of the outer hexagon or the inner hexagon of the nut has fallen and damaged, the assembly will be more difficult. For the nut that has been corroded or has a lot of grease, it is often difficult to assemble the nut and the nut with a solvent (such as a rust remover) to spray the connection between the nut and the nut to allow the solvent to penetrate into the corrugations. The hardest operation in the torx coupling assembly process is removing the hub from the shaft.
Regarding the keyed hub, normally use a three-legged puller or a four-legged puller to complete the assembly. The selected puller should be adapted to the shape and size of the wheel hub, and the right-angle hooks of each foot of the puller should be suitable for the connection of the rear front of the wheel hub, and the slippage will never occur when exerting force. This method is only used for the assembly of hubs with a relatively small interference. For hubs with a relatively large interference, the heating method is often used, or the assembly can be completed with hydraulic pressure at the same time. 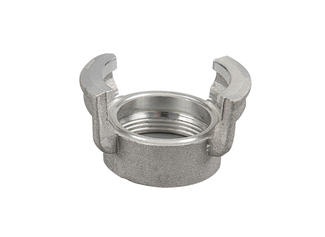 PREV：What are the types of couplings?
NEXT：The rigidity of the diaphragm coupling in the torsional direction is high