What is the temperature resistance of the coupling elastomer?

home / news / Industry News / What is the temperature resistance of the coupling elastomer?

What is the temperature resistance of the coupling elastomer?

Plum coupling is a widely used coupling, also called claw coupling, which is composed of two non-metal claw discs and an elastic body. The materials are 45# steel and aluminum alloy. Elastomers are usually made of fortification plastic or rubber, and usually use polyurethane as the raw material. According to the needs of the operating conditions, the strength of the elastic body is normally 85 degrees, 90 degrees and 95 degrees. Coupling time is also elastic time. The plum-blossom coupling should normally be used as the connection of the servo power device and the stepping power device. Because elasticity is compression, it goes without saying that it is pulled. The normal elastic body has a time of 10 years because the elasticity has the effect of buffering and vibration reduction, because it is used more under the conditions of intense vibration.
The functional limit temperature of the elastomer determines the operating temperature of the coupling, which is normally 35 to +80 degrees. Plum couplings can be divided into clamping plum couplings and positioning plum couplings according to the flow form. The clamping plum coupling is a screw that holds the shaft tightly, and the positioning is two screws at a 90-degree angle. axis. The plum-shaped elastic coupling is composed of two half-couplings with opposite claws and elastic parts, and the plum-shaped elastic parts are placed between the claws of the two half-couplings to complete the coupling of the two half-couplings. connect. It has the characteristics of compensating for the absolute displacement of the two shafts, vibration reduction, buffering, small radial dimension, simple design, no need for smoothness, high bearing strength, and convenient maintenance. 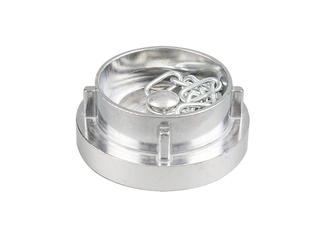 It is suitable for connecting two coaxial lines, starting multiple times, changing positive and negative, medium and low speed, medium and small power transmission shafting, standard for high reliability and high operating position, not fast in heavy load and restricted by axial size, after changing the elastic parts. Axis for tough locations. After the revision is required, the materials of the plum-shaped elastic parts are polyurethane and cast nylon. Different materials are selected according to different occasions and environments, such as fans, pumps, light industry, dyeing, etc. for balance, and when the load changes are not large, polyurethane can be used. The price of the two materials is not much different.

PREV：How to install a snake spring coupling?
NEXT：What does the evaluation of coupling components mean?